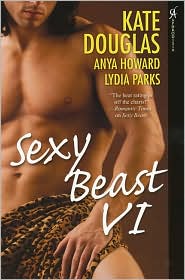 A small candle on a table gave light to the otherwise dark room. Rulf sat in a backless wooden chair beside it. His attention was focused idly on a piece of wood he was carving with a small bone-handled knife. He did not look up as Inga entered and let the furs fall behind her.

“I did not know one of my servants had suddenly gone deaf,” he said.

Inga spoke strongly, “What did you do with my collar, chieftain?”

Rulf looked up at once. His eyes shone fiercely, but she saw how his hands trembled ever so slightly as he laid the knife and wood on the table. The quiet that suffused the room was heady with unspoken emotions.

At last Rulf announced, “You are no longer love chattel, Lady Swan Maiden. Your property is returned, your freedom restored.”

Rulf frowned slightly. “By mine.”

Inga directed the full countenance of her powers to radiate through her. She glowed—blood, sinew, bone and flesh—with the holy radiance of a true daughter of the Goddess. Rulf shuddered and fell to his knees. Like a slave, he bowed his own head.

“I deserve banishment for not seeing the enemy I welcomed into my own village and home,” he declared. “No man of wisdom would have let such a malevolent creature near his tribe or child. Yet I placed you in grave danger, Lady. I am not worthy to claim and possess a daughter of Freyja.”

Inga felt the chafing remorse that passed through his psyche. It grieved her to the core but she knew that pity would not impress him.

“The Nebelung sorceress chose to betray the trust you gave out of sheer love for your daughter. You saved my mortal semblance by quick thinking when you placed the gown near me. If nimble action are not signs of a man’s worth, and love is no token of his most devout motives, then I have been misled. It is the motives of men and women that count—this is what one must either respect or be wary of.”

Rulf was crestfallen. “You shame me with my own words.”

“You do not believe those words, chieftain?”

“Oh yes. I believe them.” His jaw hardened and a tear welled in his eye. “But your love is better spent upon a wiser man than the one who kneels before you.”

The love Inga felt for him was painful in its intensity. Her own hands shook with emotion as she laid them upon the crown of his head. The vestige of power undulated wildly through her, blinding Rulf in radiance and filling the room with the glorious light of Vanaheim.

The power of the valkyrie thundered in Inga’s reproach, “Then do not kneel, chieftain!”

Inga released her power with a luxurious exhale. The power of it pealed through the room, rippling Rulf’s hair and caressing the furs at the door and the covers upon the bed. She bade the gown farewell, and the light of Vanaheim danced in ecstasy and seeped back into the pelted fabric. Then as the garment fell from her body, the weight of care slipped away altogether. No longer was she the valkyrie bound to power but the swan maiden at peace with love. Attired in flesh and desire and nothing more. She smiled and knelt to the floor, and taking her sacred vestment, lifted it to him in offering.

“My love is yours already,” she said, “and my respect, always, if you will possess this until the day of my mortal death.”

The heavenly illumination faded. Again they faced one another in the soft candlelight. The brooding disappeared from Rulf’s face, while the resolve she had come to adore returned. Rising to his feet, he carried the gown to the bed and laid it at the foot. He captured Inga’s hand and swept her into a fevered embrace.

The lips of Inga’s golden chieftain ravished her throat, imparting kisses that drove her at once into throes of sensation.

“Never again shall I kneel to you,” he said huskily in her ear, “but adore you with my claim!”

©2009 by Anya Howard
Excerpted from her story, Wings of the Swan, which appears in Kensington Aphrodisia’s SEXY BEAST VI

Where Anya Howard's Wings of the Swan ended her novel The Story of Odette continues. Click the cover for more info on this sizzling novel! 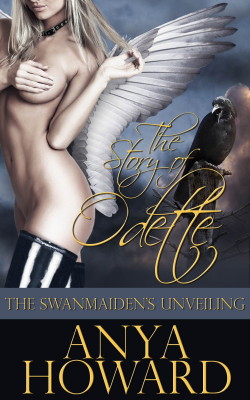