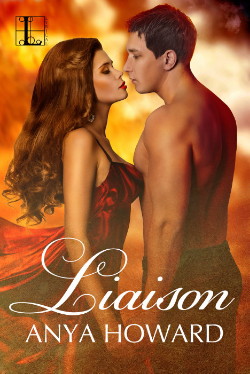 Rattled to full consciousness, I gasped for air. My eyelids opened and shattered the crystals that seemed to bind the lashes.

It was then I saw it. An obliqueness, too dense to be shadow, crouched between my chair and the hearth. I was struck with an instinctive terror; my limbs were paralyzed with fear. But as I beheld this unnatural blackness, my fear was surpassed by the dawning determination to know what this was. My determination ignored the rational voice that warned to get up and move away.

A flicker from the hearth embers caught a glint of sculpted form. I gasped and jumped, and the sudden acceleration of blood in my system intensified the voice of ration. But as the form began to take substance and definition, my natural inquisitiveness silenced it. The lightless figure slowly rose so that I could make out the silhouette of a head, shoulders, the distinct and rounded outlines of a woman.

It was then my conscious screamed for me to flee. But her thoughts broached the space between us, and with an unspeaking command, she inflamed my curiosity — goaded it, willed it to a frenzied, single-purposed thing of which she alone held power. Rational fear lay dormant, so that I sat as in a stupor of fascination under her demanding will. It was a maneuver known and taught by unseemly spirits; ancient and potentially lethal to mortals.

But at the moment I could not have cared less.

Her hands rose and she lifted the length of her hair. For the first time I perceived more than dark outline, as she let go of the strands and they cascaded like glowing copper over two slender shoulders. My heart skipped a pace, and her skin began to take color and texture –- all pale, satiny cream — and as I stared at her rounded, desirable limbs, I felt my curiosity drained forcibly away. I heard common sense beckoning from a remote distance, and I attempted to respond. But as I started up from the chair, the ghostly figure pounced into my lap. I was weighted down by sheer, primitive horror.

Her thighs straddled my legs. I discovered I had lost control of my body. My limbs were utterly immobile, though I could feel with acute clarity the cool hands that laced the back of my neck, the dewed sex that glided lightly over my crotch. Her face was still blackness to me, but her mouth braised my chin and her chilled tongue flicked over my gaping lips. She spoke something to me. The resonance of her voice lulled my fear as if it were hers to control entirely. Even now I do not know what it was exactly she commanded; only that I could not refuse. My jaw moved, and I began to recite some lengthy, mystically-imbued alchemic procedure. In the original Arabic, I related this knowledge of which I was acquainted only by chance from a manuscript I had come across during my university days. My brain was raped, slowly and steadily, in the pilfering of this arcane formula.

At the same time my other senses were aroused by the closeness of this unearthly, nocturnal figure. And as the mechanical recitation echoed against the wall boards, the copper halo dimmed before my eyes and the disguise of darkness fell away.